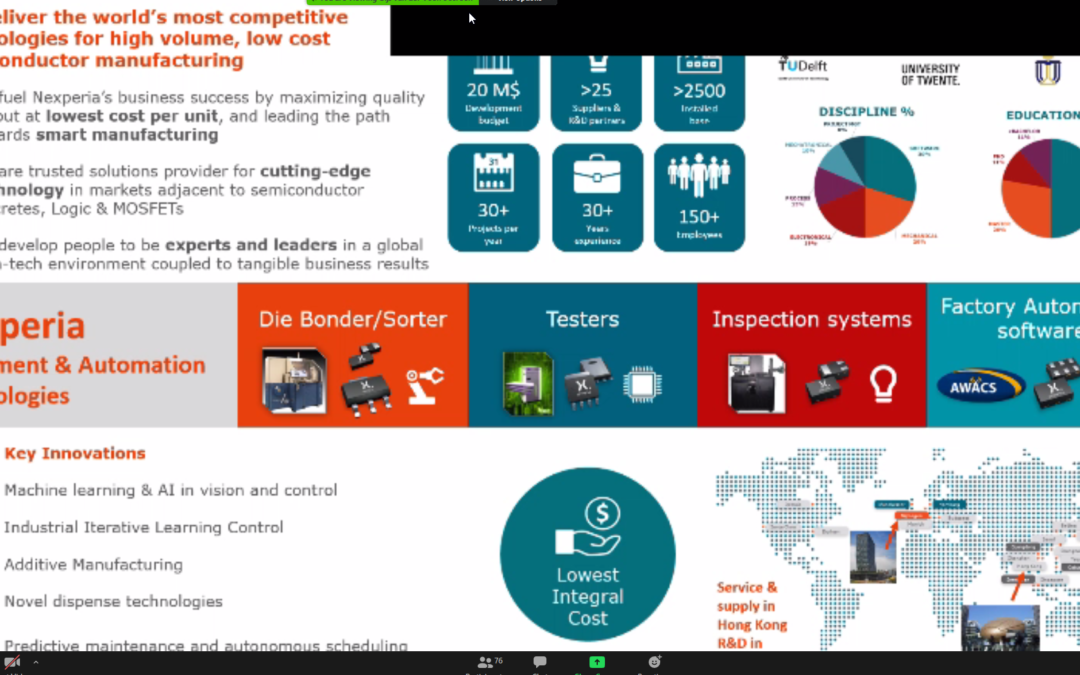 In the last week before the Christmas holidays, on Tuesday the 15th of December, Dispuut Taylor invited Nexperia to give the students of HTE an introduction to their company. Originally the lecture was planned over the whole length of the morning. However due to a tightening of corona measure the event was switched to online.  Via Zoom, the three hosts introduced us to the company itself. Started as a subsidiary company of Eindhoven’s Philips, the company grew to be an independent company dedicated to the production of essential semiconductors. Nexperia nowadays has its headquarters in Nijmegen, two wafer fabs in Hamburg and Manchester, and three assembly centres. The company has vendors in automotive, portable devices, computing, and telecommunication.

The second host expanded the lecture with an insight into one of their machines, which places the microdevices on a wafer. The rotating mechanism picks up the small, printed tiles with air pressure and with high accuracy it places the devices in a designated area. The video of this machine in motion had to be made in slow-motion for the human eye to see what is happening.

Lastly, a case study was examined. Nexperia also had their employees work from home. However, the development of their products was not supposed to stand still. Holding a microdevice in place in a package was done by creating a vacuum. However, after a quick calculation, this way would be cheaper with a sort of glue. As glue can deteriorate with time and/or can be harmful to the device, another way was developed and tested at home. This way, using water adhesion, was tested digitally and physically and the host admitted that the outcome was rather dull for there were no real complications found.

As the lecture was coming to an end the hosts proclaimed there were possibilities to go for an internship and afterward questions. As a finisher, Jaap announced to the hosts a bottle of Taylor port will be sent to them by mail.