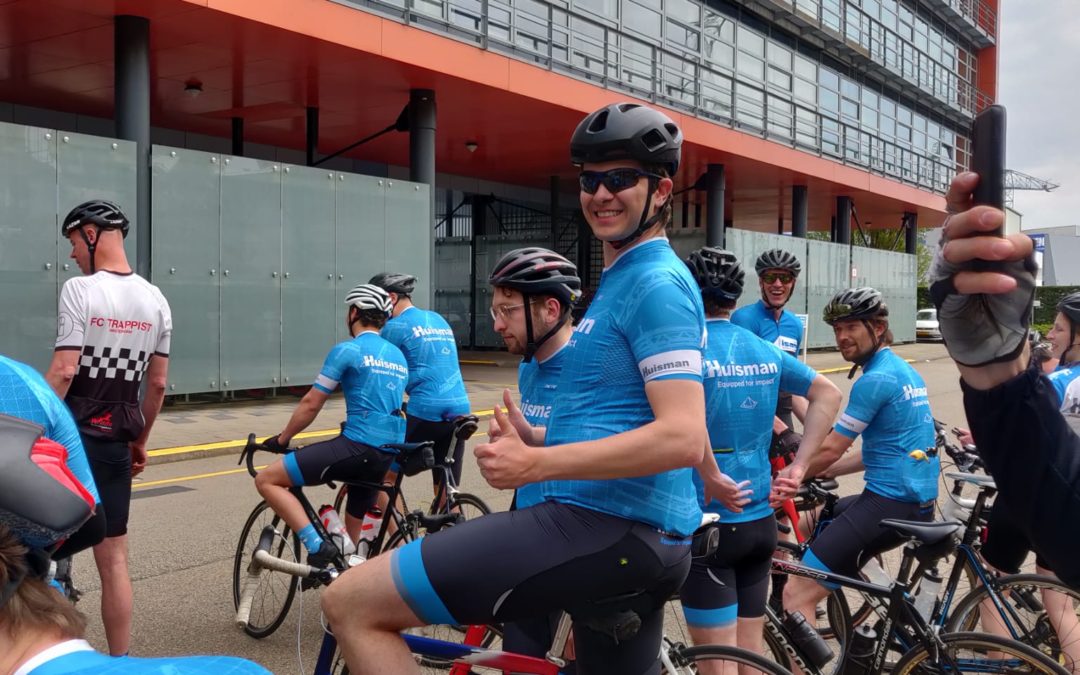 Today the biking trip with Huisman was planned. Wearing the sponsored kit of Huisman, Dehlia and I left from Delft and headed over to Huisman. Biking along the Schie, we very quickly were passed by Stan and Jan. With our group of four we continued until we arrived at our destination. Outside of the gates of Huisman, more and more people started arriving and the hype started building up. After having to get visitor badges and then not having to get visitor badges anymore, we entered the Huisman facility.

Inside we were met by some very friendly faces from Huisman. Together with 22 High-Tech students and roughly the same amount of people from Huisman, everybody posed together to make a really nice group picture. Then the group was divided into two subgroups, one group biking 60+ km’s and the other group 30+ km’s. I joined the 60 km group so I won’t be telling you about the other group, which also had a tandem bike by the way!

With a peloton of roughly 20 people, the long ride group left and I immediately noticed there was some serious riding coming. I personally started in the back of the group, since I did not have the route and I first wanted to see in which way the cat jumped. Enjoying my low drag, the number of kilometers traveled started to increase. However as the number of kilometers started to increase, the peloton started to become slimmer and slimmer. A few mechanical failures saw people having to drop out, but Huisman employees stepped in very nicely to prevent people from being left alone.

As the ride entered the halfway point and fatigue started to occur, more and more people started to lose the rear of the group. The last piece of the ride also included a headwind, but the peloton leaders were set on improving the average speed. This meant I had to abort the conversation I was having with one of the employees and focus all the energy on keeping up.

Upon arriving again at the Huisman facility everyone had given their everything and we were very content with the ride. As a nice surprise, we could eat spaghetti, grab a bowl of soup and eat a nice salad. And to top it all off drinking beers at the Tacke Bar poured by Charlotte Roodenburg, daughter of Joop Roodenburg. She even told the interesting fact that across the world in the Huisman Facilities, there is identical copies of the Tacke bar that can be found. It is of course very important for employees to have a nice atmosphere to close off the week and drink a couple of drinks.

All in all, I can say that I really enjoyed this event. Friendly employees being interested and open to a conversation whether or not Huisman could be the right match for you. A very pleasant atmosphere and to top it all off, a nice bike ride.